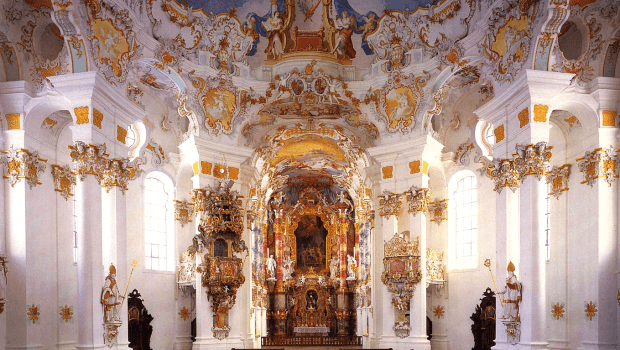 Wieskirche or Wies is the Holy site of the “Pilgrimage Church of the Scourged Savior” also otherwise called the “the Church in the Meadow”. It is emblematic of the pinnacle of Baroque architecture and the result of the wondrous work of the multifaceted brothers Dominikus and Johann Baptist Zimmermann from Wessobrunn. The famous writer Perter Dörfler described Wieskirche by saying: “The Wies is a bit of heaven in this suffering world.”

The ethereal murals are located in the interior of the majestic Bavarian Church along with the image of Christ. It radiates a deep meditative spirit and explicates theological thematic, all of these are appreciated internationally and therefore also recognized by UNESCO.

Since the tears first rolled down the dilapidated wooden statue of Scourging at the Pillar in 1738 the site has held a sacrosanct position in the hearts of Christians across the globe. The region resonates of intense spirituality and artistic richness. Hundreds of thousands of pilgrims still flock here every year along with myriad tourists who come to experience the true German heritage.

At the foothills of the majestic Alpine meadows, perching right in between the ‘land of monasteries’ (Pfaffenwinkel), shines magnificently – the Pilgrimage Church of Wies. It lies in the administrative jurisdiction of Steingaden in the district of Weilheim-Schongau, Bavaria, Germany (South).

The road to Wieskirche is famously called the Romantic Road. The highway is located between Würzburg and Füssen in the southern part of Germany.

It is said that the best way to reach Wieskirche is through the road, either using your own conveyance or through public transportation. Moreover, the usual route taken begins from Munich which also houses the closest airport and one eventually travels south of the city. Other prominent locations through which you can reach Wies is Neuschwanstein Castle which is located at a comfortable distance of 50 miles.

From Füssen, you can take the B-17 route and travel north and reach the closest village town of Steingaden. From here Wieskirche is at a modest distance of 22kms or 14 miles. Travelers have also preferred to come from Garmisch-Partenkirchen in Bavaria. You will just have to travel 50kms more down south and reach the destination.

Christ, more often than not has been the symbol of the redeemer or the savior in modern interpretations. Furthermore, if we look at Christian art, specifically the scenes from Passion of Christ – which essentially describes Christs’ life through art of various kinds. The ‘Scourging at the Pillar’ or the ‘Flagellation of Christ’, as a symbol holds more prominence. This is because it epitomizes the sacrifice that Christ made for the entire human kind. Upon looking at the image the seer is definitely bound to be awestruck by the intense gaze of the sculpture. The view is definitely moving and emotive. The time period described here is the prelude to the crucifixion.

As the myth around Wieskirche goes, it was in the year 1738 that tears were seen rolling down the ‘Scourged Savior’s’ sculpture in wood. Moreover, pilgrims numbering in thousands rushed from spaces across the region to witness this miracle. Through the ages believers and pilgrims have flocked to this shrine and scenes of miraculous healing have also been witnessed. Therefore, Wies holds a major historical and cultural position in the hearts of the Christian community.

Wies also managed to survive the period of ‘secularization of Bavaria’ during the early 19th century and thus, in 1983 it was added to the UNESCO World Heritage List. The next six years, between 1985 and 1991 the Church saw all rounded restoration and was resurrected to live and breathe in the current form and glory.