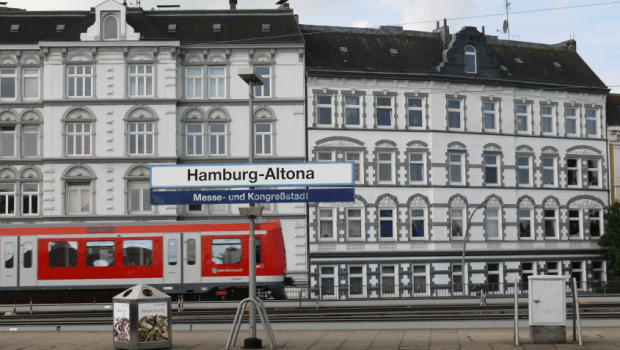 Home / Places / In the bosom of the Elbe: Altona

In the bosom of the Elbe: Altona

Altona has a palimpsest like manifestation, a living, berating city within a city. With Elbe on its one side, the many canals, the flavor-full delicacies, the bustling landscape, and the glorious history – it is among the seven boroughs of Hamburg. Altona has been transforming for centuries. Its multicultural demography caters to a working-class population which is an amalgamation of individuals predominantly form Jewish and Turkish descent. It has managed to remain distinct from the rest of Hamburg.

The famous writer and philosopher Jean-Paul Sartre during his last days wrote a five act play titled as: The Condemned of Altona. It was also turned into a film later and the action is set in the borough of Altona. The play revolves around the whole Nazi fiasco.

It is located on the west end of the city-state of Hamburg, Germany. The borough is located right on the bank of the river Elbe on the southern side. The spread of Altona is about 77.5 sq. Km or 29.9 sq. mi.

Hamburg-Mitte borders Altona on the south and the east, on the south-western side one will find Elbmitte, the northeastern side is covered by the district of Eimsbüttel, furthermore, on the north and west lies Schleswig-Holstein.

The city of Hamburg experiences all the four seasons and the yearly temperatures are nearly average. If you’re planning a visit then the city is open at all times of the year. Carrying a rain jacket or an umbrella is a must during summers.

The winters are quite cold so it is advisable to be prepared for the worst. Temperatures around the months of December and January (the coldest months) range between: -2 to 1 degree centigrade. On the other hand summers are not really hot as experienced by the other side of the hemisphere. July and August are the warmest moths and the maximum temperature around this time of the year ranges between: 20 and 22 degree centigrade.

What is interesting about the name Altona is its etymological route. It is said to have been derived from Niederdeutsch “Al to nah” which when translated means: Far to near, basically from Hamburg. Hamburg and Altona held rivalries and it was not limited to just the name, their cultures and flags as well carried the same spirit.

The history of Altona has been quite complicated. Its founding stones had been known to be laid in or around 1535 by the Danish monarchy (Duchy of Holstein). It was to become the politico-economic counterweight to the kingdom of Hamburg, towards which it had a long standing rivalry. Altona held a crucial strategic position geographically. As it was the only port to the North Sea and thus it grew into becoming Denmark’s second biggest town.

In 1844 the railway line was built and today the same railway line has become its life line. This major railway station (Hamburg-Altona) also connects with the local rapid transit system and touches the various local bus lines. Many tourists prefer this mode to go in and around Hamburg.

In 1864 the Duchy lost Altona and it was ceded to Austria and Prussia as per the Treaty of Vienna after the war. Furthermore, due to administrative reasons a new treaty, treaty of Gastein was signed in 1865, as per which Altona was to come under the administration of Austria. Then again, with the commencement of the German war of 1866 (between Austria and Prussia) all the signed treaties become null and void and up-till 1937 it remained a Prussian city.  Later that same year it finally became a part of the City of Hamburg.

The Portuguese Jews, who were barred in many ways from Hamburg had started to acquire land in Altona since 1611 and then started living there. It essentially became populated by various Jewish communities, from the Ashkenazic Jews who first settled here in the 1600’s, then came in the Jews from Lithuania who were expelled from Hamburg after the Russian-Polish War of 1654-65. Furthermore, it was after the annulment of the emancipation that was granted to the Jews during the French occupation of Hamburg, Altona witnessed a large scale migration of Jewish families.

The suburb of Altona, today, appears to be an amalgamation of all these historical events. Jewish presence is quite strong in terms of the many synagogues and Hebrew art. Altona became a prominent place for Jewish culture and scholarship to grow and prosper. The Jewish population essentially engaged in commercial activities and the port at Altona definitely assisted them in expanding their various businesses. During the 19th century Hamburg was entrenched in the phenomena of mercantilism. This commercial character has quite a long history in the making and evident in today’s Altona’s large working-class population.

The city-state of Hamburg has often been described as being as watery as Venice and Amsterdam. This is because of the three traversing rivers: Alster, the Elbe, and the Bille. The narrow canals which are known as ‘fleete’ enmesh the city and quite literally that is how it looks from above. Altona is bordered by the Elbe. There is a large domestic and international train station making it important and a bustling destination. The borough of Altona comprises of quarters, namely:

Travelling in the city:

Going around Altona becomes convenient with the host of well-functioning public transportation systems in palce. Furthermore, travelling through modes such as bikes, rail and taxies is really great. There are well charted out routes along with signs so there is no way you’ll get lost. The Hamburg-Finkenwerder Airport is the closest airport. It is situated right across the river Elbe.

Rail as a medium of conveyance is quite popular. There are five stations in Hamburg: Altona, Harburg, Hauptbahnhot, Dammtor, and the central station of Hauptbahnhof.

Hamburg’s most vibrant district: Altona is located near the high bank of the river Elbe and has a vibrant urban makeup. Dawned in its Neo-classical houses and myriad canals, its features make it particularly a desirable place to live in. There are many shopping boulevards, and bakeries and bars that are nested in the narrow streets of the borough. It can be an explorer’s paradise and like a cave for the solitude seeker.

The many buildings and markets of the city were earlier massive factories and industrial complexes. By walking through the city you will get to witness and see how Europe as a whole transformed through the period of industrialization and the Great Wars.

Each year Altona hosts a few cultural events which are a sight in their own right. To name a few: