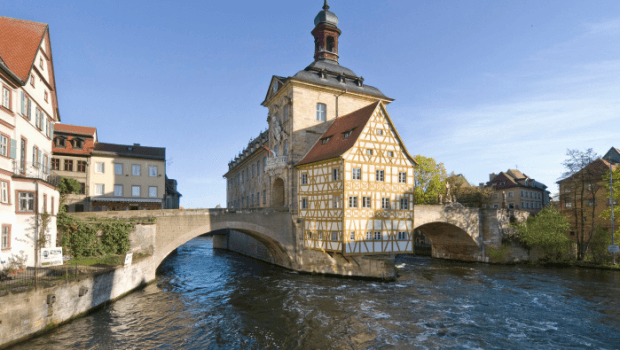 Home / Places / Bamberg: Where the Imperial Heritage comes to Life

Bamberg: Where the Imperial Heritage comes to Life

Located in the northern section of Bavaria, Germany, the Imperial city of Bamberg is a magnanimous medieval city, which offers more than just splendid sights, ancient buildings, and Venice-like waterways. It has received much international recognition along with its Altstadt (Old Town) being tagged as UNESCO’s World Heritage Site.

Its historic townscape sits on many lush green Bavarian hills and shows a brilliantly splendid confluence of medieval structures and baroque architecture. The city poses a near fantastical appearance through the syntheses of medieval churches, and Baroque palaces and town houses.

The historic city of Bamberg is situated in the north of Bavaria, in southern Germany. It is located in the Upper Franconia region sitting upon the river Regnitz almost as of it was riding it.

The weather here carries feature of a temperate and marine region. It remains cool and cloudy most of the time in the year. It rains here during summers and August remains quite wet and February on the other hand is the driest month. The coldest month is January with the normal temperature averaging at -0.2°C and the warmest is July with the temperatures reaching 18.3°C. The months of: June, July and August have the best weather conditions and is most suited for travelling here.

History has come to know of Bamberg since 902 AD. It used to be the seat of the Babernberg family at around the same time and later on after their extinction it moved to a Saxon house. The Holy Emperor Henry II is known to have made it a family inheritance in 1007 AD. Furthermore, it was to become a separate diocese so that Christianity could take deeper roots in the districts of Franconia. With the blessings of Pope John XVIII, Henry II got a cathedral constructed which was consecrated on May 6, 1012.

During the early middle ages it helped in forming a crucial link with the Slavs from Poland and Pomerania. It has always held the position of a prominent cultural and intellectual center since 18th century. Furthermore, it played a crucial role during the Age of Enlightenment as the prominent thinkers of the age viz. Hegel and Hoffmann resided here and developed many of their famous theories.

Still is remnant of its medieval past through the framework of the town along with the surviving ecclesiastical and secular buildings from the medieval era. Its architecture carries influences from northern Germany and Hungary. It shows a very interesting confluence of the medieval and Baroque architectural style along with certain infuses from modernity. Bamberg poses impressive illustrations of how an early medieval town would look like in Central Europe though its buildings and architecture.

The medieval layout and the three settlement areas are well preserved and show absolutely no adversarial impact of modernist endeavors. While walking through the streets of Bamberg, which by the way is the best way to explore the city, you’ll realize how epochs have fused together, it’s like walking through history quite literally. Moreover, this fluidity is also visible though human interactions.

Furthermore, it is in-fact the result of the efforts made by the people of Bamberg that the city has managed to survive as an authentic city. The restoration programs since 1950’s have taken care of the technical aspects and are responsible for much of the cultural revivals. Also, it is indeed important to understand that these tendencies of reviving the traditions and cultural heritage is not unidimensional, it is a result of a legislative dictum made by the central government but again, it was based on the requirements posed by the people. The population of Bamberg is proud of its heritage and it shows.

The hills around Bamberg are crowned by churches, it is dude to this reason it has been popularized by the name of Franconian Rome. Also, the Old Town area of Bamberg is in-fact the largest preserved historic center in Germany since 1993, and also recognized as the UNESCO world heritage site.

The markets shine with festive spirit especially during Christmas and it is also the best time to visit the city. The beer tradition of Bamberg gives Oktoberfest a good run for it money.

Travelling in the city:

It is often said that the best way to travel in a city is on foot. The same is recommended for Bamberg. The city is not that big and can be traced completely in a matter of 2 days, a minimum that would do justice to the architectural masterpieces of the city.

Each section of the city is well connected with busses and there is also a major train station (Hauptbahnhof) which is a little less than 2 kilometers northeast of Altstadt (Old City).

There is a something that every traveler or most individuals wished to do once at least. That is time travel. Well Bamberg the city gives you that very opportunity. The only problem is that there is just so much to do and see here. The architecture is not the only thing, there is the food, the beers along with the canals and the same smell that your olfactory produces when in contact with an aging book. There are places and then there are descriptions and then there is Bamberg which does not require the qualification of an adjective.

You can try the many local breweries along with the fantastic restaurants which serve authentic local food and exiting pubs. When in Bamberg it would be a sin to not try its famous smoked beer which is locally known as: Rauchbier.

The city is also the center of many festivities, such as the Sandkerwa. It is a folk festival which encompasses the entire town. It is spread over a period of 6 days and held during the last weekend of August. Fish jousting, beers, and food are some of the main attractions of the festival.