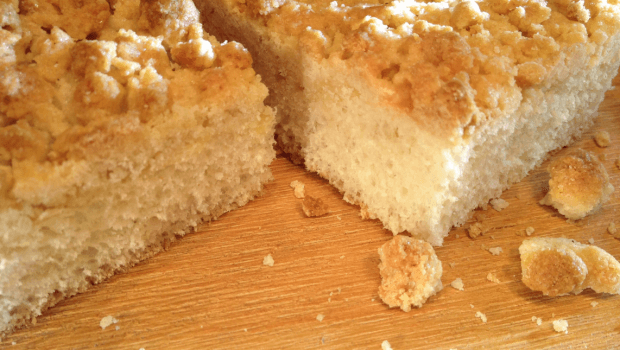 Streuselkuchen is a form of traditional crumb cake. Each of its slices is just about an inch thick and the crumbs compose nearly 50 percent of the cakes height. Streusel is significant because it adds character to the cake. It defines the crumb-like topping of the cake. There are also variants which require nuts and fruits to be added in the cake batter but the one with sour fruits holds greater fame.

The popularity of Streuselkuchen is rather evident considering it is served during almost all sorts of celebrations and/or gatherings. Usually it is eaten as a dessert along with whipped cream as an accompaniment.

The recipe of Streuselkuchen is said to have originated in Silesia which now falls in the western region of Poland. Though, as the story of food goes it is indeed hard to prove though the available documents. Moreover, at around the 19th century it is said to have spread all over the neighbouring regions of Prussian provinces and become a common household delicacy. Also, as migration of Silesians intensified so did the spread of the cake. Furthermore, the cake has become quite popular and it is in-fact found everywhere in Germany. Tourists can spot Streuselkuchen and its variants in most of the homes and bakeries that have sprouted on the myriad streets of Germany.

The initial popularity of Streuselkuchen is credited to have been conducted through the fairs. It slowly began to be served during thanksgiving, weddings, baptisms and other celebrations. During the 20th century it spread though the Rhineland and became popular there. Streuselkuchen is also known as a ‘funeral cake’. There is no specific reason for this sort of a name but just because it began to be served specifically during funerals in some regions, thus it got the name.

It is a speciality of German land. The traditional recipe involved Streuselkuchen being made out of yeast dough wrapped using toppings of sweet crumbs which are referred to as streusels. The other main ingredients include: sugar, butter and flour and ideally these should be mixed in a ratio of 1:1:2. Many of its variants are prepared with fillings that are sour and fruity. The fruity filling involves apples, gooseberries, sour cherries, rhubarb, poppy seeds or crème.

Traditionally speaking, Streuselkuchen or the streusel cake is prepared by rolling the dough out on the baking tray or sheet. Then with the sprinkling of streusel on the base of the dough, the layering process begins. The moist texture is attained by adding vanilla cream, eggs, and sugar or honey water. It is also attached with sheet cake prepared using yeast dough. Upon this, the layers of apples and/or poppy seed cake are added. Finally, it is then baked at 220 degree centigrade. The rich cake provides energy instantaneously along with fantastic taste and flood of flavours.

Methods: How to render the Streuselkuchen?

First, you will have to take a medium sized heatproof bowl. Now, mix the above mentioned ingredients except the butter into the bowl. In a separate bowl add the butter and by using a fork stir till the point moist clumps form. Next, pour it in the first bowl and go on further mixing. After it is mixed well, cover the open end of the bowl by using a plastic sheet or a cellophane paper and place it in a refrigerator.

Take a spring foam pan and make sure it has a 10 inch diameter. Now, you need to butter and flour the spring foam pan. In the meantime preheat the oven at 325 degree Fahrenheit.

Now, take three separate large sized bowls and place inside the first one slices of apples, cinnamon and cloves, in the second bowl you will be sifting corn-starch, all-purpose flour, baking powder and salt, and finally in the third bowl you will have to take – butter, powdered sugar and the lemon peel, and combine them while putting in the vanilla bean seeds.

Next, using an electric mixer for the purpose of blending the butter mixture is a better idea. Also, adding eggs in this mixture will be slightly tricky, so you will have to take extra care here. It is important that you add the eggs in to the mixture one at a time. Also, remember to blend the mixture with each addition of egg. Lastly, beat in the egg yolk. Now, add the mixture of flour as prepared above and blend the mixture further.

The next step involves taking the baking pan and evenly spreading this prepared mixture on it. Keep in mind that the layers of the cake have to be thin. Also, place the apples in concentric circles above the batter. Use the streusel by sprinkling it evenly over the apples. It has to appear as though a slightly thick layer has covered the apples.

The final step involves baking the cake for about 1 hour 20 minutes. The streusel should become crispy. You can also use a tester to check whether the cake is baked enough or not. After the baking process is completed allow the cake to cool down and then place it on a pan or a rack and allow it to cool further for the next 15 minutes or so. The cake will be ready to serve. You can also store it in a refrigerator or simply wrap it in a tin foil and store it in a cool place. Before serving you can also sift powdered sugar on top of the cake for decoration.