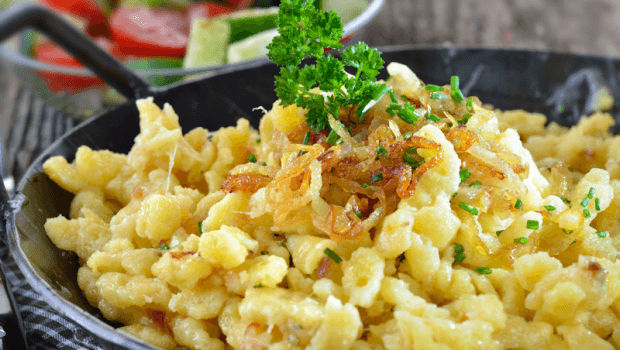 Spätzle: The German love for Pasta

The first name that comes to the mind when one thinks of pasta is Italy, however, the Germans too loves pastas. Their answer to the popular pasta is the Spätzle. Spätzle is a speciality hailing from Germany and indeed this variety of pasta is truly distinct and different in this part of the world. The Spätzle has managed to occupy a crucial position in terms of identity and cooking culture of Germany, particularly of the Swabian or the Schwaben region.

You can find Spätzle in these regions under the name of Spätzli, Spatzen, and Knöpfle. The traditional preparation of Spätzle involves them being cooked along with eggs, flour, water and salt. Spätzle involves a different kind of dough preparation also as opposed to the way it is made in Italy. Here, in Germany, the dough of Spätzle is much more moister and softer. This is so that the dough does not roll out.

As is the case with most dishes so as is with the Spätzle. Its precise geographic origins are not quite known. You can find many regions within Germany which claim in the same regard. Culinary historians have shown that the first mention of the Spätzle dates back to 1725. However, there are illustrations available from the medieval times which mark their origins to predate the above mentioned time period. As far as the noodles alone are concerned, they have been in existence for a very long time. They are known to have originated almost 4000 years ago in East Asia and then came to Europe almost 2000 years ago.

The Spätzle and Knöpfle carry a significant amount of historical and cultural significance. This tradition of production and preparation dates back many centuries in the region. You can also find their references in the form of poems about their favourite dish such as the one published in 1838 in the Black Forest messenger, the poem: The praise of Schwabenknöpfle, the poem Schwäbische Leibspeisa or the Spätzles Song.

Traditionally speaking the preparation of these noodles in Swabia popularly began in the 18th century. As per a certain document dating from the year 1725, the Council of Württemberg along with the personal physician: Lentilius Knöpflein and Spazen are known to have mentioned the dish as everything that is together prepared from flour. During this time the Spätzle began to spread widely in the Swabian-Alemannic region. This region was not particularly opulent and the grains required for the preparation also could grow without much fashioning. Thus the dish also gained popularity. The spelled flour which was generated out of the grains was rich in gluten and this resulted in the dough could at times be prepared even without the addition of eggs. At that time it was this dough which was primarily used for the preparation of the noodles.

In the initial methods the preparation of the noodles was entirely done using the hands. As and when then industrialisation spirit emerged and started expanding the use of simple tools began in the production process. The Spätzle at this time had become a symbolic regional identity of the Swabians and their love for noodles. It was termed as the alpha and the omega of the Swabian menu.

Today also you can find the references of Spätzlemachine or Knöpfle in the various festivities and regional customs. Cooking competitions are also organised around the same tradition and festivals. You can also attend the many exhibitions which present documentations and involve sharing of information about the classical and the modern day preparation methods. Among the most renowned Swabian authors is Siegfried Ruoß. He wrote a cook book titling it as Spätzlemachine kitchen. The book comprises of over 50 different kinds of noodles recipes belonging from the Swabian region. There is also a museum in the Upper Swabia’s Bad Waldsee which has a spaetzle Museum which began in the year 2013. The earliest recipe of the Spaetzle was found in a cookbook from the year 1783 which was called the Göppinger cookbook. It was written by a certain Rosina Dorothea Knör.

There are not many ingredients that are involved in the preparation of the Spätzle. Among the few ingredients are: eggs, flour, and salt. The Swabian rule of thumb states that one must use one more egg than the number of individual who will be eating the Spätzle. Most of the times water is also added to the preparation to generate the dough becomes thinner. Traditionally a coarse type of flour is used which is locally known as Dunstmehl is used in the preparation of spätzle. This dough is similar to the first clear from the United States or the hurba from the Czech region. It also carries similarity to the semolina flour or pasta flour from the United Kingdom. It is primarily because of this kind of flour that the noodles get a chewy texture. But one must be careful otherwise with the addition of water the dough can also become crumbly.

The Spätzle is made by scraping long and thin strips of dough right off the wooden chopping board which is more often than not wet. Then these strips are placed into boiling salted water and then they are cooked till the time they start to rise on the surface. In the case of the preparation of a speciality dishes the dough can also be enriched with minced pork liver which becomes the Leberspätzle. Also, spinach can be added to the dough and/or finely grated cheese.

In today’s Germany the Spätzle is a speciality which hails from the Swabian region and its associations are with the German state of Baden-Württemberg. They also claim affiliations with the region of Alsace in the France. Spätzle is so popular in Germany that its annual production almost measures 40,000 tonnes. You can find pre-made Spätzle in the many supermarkets internationally.

The classical and the most popular way of forming the Spätzle is as follows:

The fresh Spätzle strips that are formed are placed into boiling salt water just about long enough till the point in time they rise to the top of the surface of the pot. The Spätzle is then removed and served in an instant.

Firstly you will be required to take a large sized bowl and combine together flour, salt, pepper and the nutmeg. Now mix them properly.

In a completely separate bowl of similar dimensions whisk the eggs along with milk.

In the first bowl which contains the flour mixture after mixing them well enough make a well like formation right in the centre. Then you can go on pouring the egg and milk mixture. Now with gentle hands carefully begin to mix the flour with the egg and milk. Combine them till the point they form dough which is smooth and thick. With that done allow the dough to settle and rest for 10 to 15 minutes.

Next, you will be required to take a large, deep pot. Pour about 3 quarts of salted water into the pot and bring it to boil. When the water starts to boil reduce the heat to the point where the water keeps on simmering. Now is the point where you can begin working on the spaetzli. You can choose any of the above mentioned machines or by the traditional hand held way go on making the spaetzle strips. When the strips are ready by any of the methods you can then place them in the simmering salted water. Remember to work batch wise else the dough just might stick together and spoil the neat formations.

You will have to cook the strips for about 3 to 4 minutes or till the point when they begin to float on the surface. Then when the strips are ready, quickly place them into a colander and give them a quick rinse using cool water. This will prevent the strips from cooking any further.

Now, take a large sized skillet and melt some butter in it. Then add the spaetzles and the tossing to coat. Let them get cooked for about a minute or two. The noodles should attain an even colouring. With that done, sprinkle the chopped chives along with the salt and pepper seasoning before serving them.

Some tips and tricks