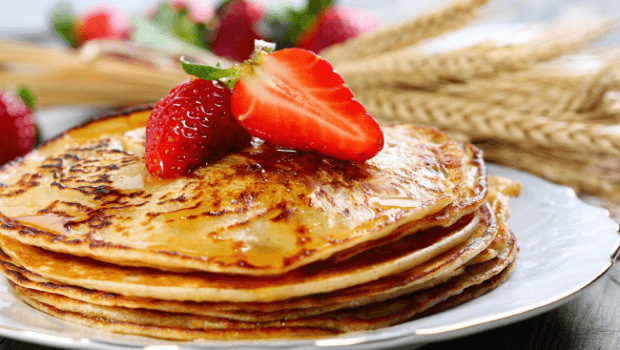 Pfannkuchen is the name given to pancakes in most parts of Germany, where as in Saxony, Berlin and Brandenburg pancakes go by the name of Eierkuchen. German styled pancakes usually have a sweet or at times they come with fillings as well. Ideally, the thickness of a pancake is greater than the French crêpes.

You can also find pancakes of different varieties, for instance, Apfelküchle is a kind which is encircled over the fried apple rings and while serving, sugar and cinnamon are used. Furthermore, Kaiserschmarrn is another variety which is much thicker in size and carries a much lighter caramel layer. The kaiserschmarrn is quite popular in the Bavarian region of Germany.

Sometimes called a flat cake, this starch based thin and round delicacy is churned out of eggs, milk and butter. They can be prepared on a griddle or a frying pan and a good dose of grease, that is, either fresh butter or the regular cooking oil. Pancakes can be served with almost a million verities of toppings and side dishes. The popular ones are fruity syrups, jams, sauces, chocolate chips, and meat.

In the North American region, Pancakes are an item which is usually consumed during breakfasts. On the other hand, in the Commonwealth region and Great Britain as well, the pancakes are largely associated with Shrove Tuesdays or by the more popular name of Pancake Day.

It is quite interesting to know that Pancakes were also consumed deign the age of the Ancient Greeks.

The Dutch baby pancake is what pancakes are generally called in Germany. They are sweet to taste and popover like in appearance and are usually consumed during breakfast. Its preparation includes eggs, flour, sugar and milk and the seasoning includes vanilla and cinnamon and fruits and other kinds of toppings are also added over.

As per the origin story, the Dutch Baby came about from a certain Manca’s Café located in Seattle during the first half of the 20th century. The Dutch family which owned the café had a daughter who had problems pronouncing the word Deutsch and she ended up pronouncing Dutch. Thus the name just happened to be created. The first recipes were served in the form of small pancakes with powdered sugar on top along with some fresh lemon juice. In the due course of time the recipe also underwent changes, resulting in regular size servings of pancakes going by the name of Big Dutch Baby which further started gaining popularity.

The German baked pancakes look something like an oversized popover rather than a pancake. Moreover, its preparation requires skillet and wedges for serving. You can spot the middle section of the pancake swell up like a soufflé and when taken out, moments later it will simply deflate. Traditionally, like most of the pancakes, lemon juice and powdered sugar are used on top along with cinnamon and some maple syrups simply enhance the taste.

Pancakes in Germany are associated with the day before the Lent.

You will first be required to preheat the oven at 425 degrees Fahrenheit. Next, you will also require medium sized heatproof glass bowls.

Now, take the eggs and beat them in the bowl carefully with salt, sugar, vanilla, butter and milk. When you observe this mixture to have been whisked properly, then add the flour and keep on beating continuously till the point it turns smooth. When that happens, set it on the side by placing a lid on top.

You will next require a 10 inch skillet made out of cast iron. Place the skillet in the preheated oven for 10 minute, when the time passes, take it out and grease the inside of the skillet with vegetable shortening and then pour in the batter, further, place it again in the oven and allow it to bake for 15 minutes. You will also have to reduce the temperature of the oven to 350 degree Fahrenheit and bake it further for 10-15 minutes till the point there comes about as golden brown and puffy.

The tricky part might be taking the baked pancake out of the skillet. So, for this purpose you might want to run a knife on the edges of the skillet. When the pancake is out, place it on a serving plate or the skillet itself and sift some of the confectioners’ sugar on top along with maple syrup, marinated berries or the glazed apples and pears.

Next, you be required to take a saucepan. In the pan add sugar, vanilla beans and seeds, the zests, and water. Stir them together and allow the mixture to boil. After it reaches the boiling point reduce the heat and keep on stirring slowly till the mixture reaches the state of syrup. This might take close to 25 minutes. After that state is attained then you will have to remove the saucepan from the heat and then add the citrus juices in it. Furthermore, take a separate bowl and combine the berries in it. Pour the syrup over these berries using a strainer and allow them to get marinated for 30 minutes.

Wash the apples and Pears, peel them and cut them in ¾ inch wedges and then place them in a bowl and finally pour the lemon juice over them.

Next, take another saucepan, place it on medium heat and melt the butter. Now, add the zests of oranges, cinnamon sticks and sugar, and stir till sugar melts. Furthermore, place the fruits inside the saucepan and increase the heat to medium. It will be difficult to stir so you will have to carefully shake the saucepan till each of the apples and pears get glazed. This should not take more than 10 minutes. Next, immediately after that increase the heat to high and instantly add the orange juice and cook the fruits till the point a knife can easily pass through them. You can also add the Calvados, just be careful while adding alcohol when on a gas stove. You could tip the pan over the flame to flame the alcohol.