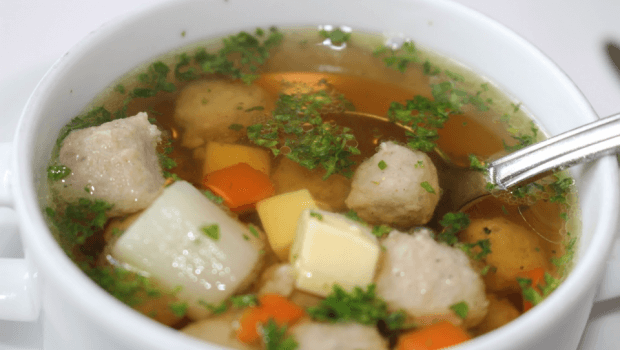 Hochzeitssuppe: The crown of every German Wedding

When literally translated, Hochzeitssuppe means ‘wedding soup’. It is a part of every traditional German wedding. It is served to the bride and the groom first and then to the guests, traditionally served at the conclusion of the wedding ceremony in the form of starters. This delicacy reigns from the northern and southern regions of Germany.

There is a certain amount of excitement associated with wedding feasts around the world. German families usually prefer a formalised arrangement for weddings. This setup comprises of a sit-down dinner and a full formal menu comprising of a number of courses arranged as a buffet. At the end of the last course meal there is usually a dance. There are also toasts and speeches along with some light hearted fun poking by families and friends of the bride and groom. A traditional wedding menu comprises of the following basic elements, of course they may flaunt any number of dishes, but the following have remained constant:

It is a German soup which is clear and based on chicken broth. Chicken meat or small meat balls along with asparagus heads, noodles and egg custard are added to it. Occasionally, raisins are also added. Hochzeitssuppe is served at the end of the wedding ceremony as a starter during the reception. It can be found in the menus of every wedding in the various regions of Germany.

The regional preparations of Hochzeitssuppe might differ depending on the taste preferences and availability of certain components. Furthermore, these days the soup can be found in various retail stores in the form of an instant soup.

Other variants are: Westfälische Hochzeitssuppe or the Westphalian wedding soup. This preparation is usually done using beef and is usually followed by cold meat and served along with remoulade, silver skin onions and pickled gherkins.

The preparation and cooking time of the soup will take up approximately 90 minutes, and the broth on the other hand requires almost 5-6 hours.

How to make the broth?

Though in the markets you can find good quality packaged broth, it is usually not advised to use them. Moreover, broth preparation will consume more time hence it is advised to do this a day in advance.

Furthermore, for the preparation of the broth you will need a large stock pot along with a cover. Place it onto the stove and add 4 quarts of cold water to it. Next, add all the vegetables listed under the broth section and bring the mixture to a boil. Then add about 1 tablespoon full of salt at first and then mix it well. Let it be on low heat for nearly 4 hours. You will have to skim the scum from time to time.

Now, extract the meat and vegetables out of the pot and pass the broth through several layers of cheese cloth – through these process fine particles can be removed. Next, you will be required to refrigerate the broth.

Now, check the broth for any hardness in the form of fat on the surface. These will have to be removed. Next, using 3 egg whites you can further clarify the broth by placing them in the cold broth and stirring quickly for a few minutes.

The broth then will be required to simmer for a while. Furthermore, after it simmers you will then have to again run this mixture through the cheesecloths into a pan. The broth is almost ready now; all you have to do is being it to a boil before serving.

Preparing the Eierstich or the Royale for the wedding soup:

Eierstich is quite popular in Germany and is used for garnishing clear soups. It is like an egg custard which is baked in a water bath and then cut in desired shapes and sizes.

To make the Royale, you will have to heat the milk in a pan till it reaches the boiling point. In the meantime, take a bowl and add the eggs, egg yolks, nutmeg and salt – all at the same time and beat it aggressively. Now, while whisking pour the hot milk slowly into the mixture. Let the mixture settle down and then pour it though a very fine sleeve into the desired formation. This sleeve will be able to collect any granular particles of nutmeg and cooked egg. An important point to keep in mind is that the foam has to be managed well as otherwise it will form an uneven crust.

Next, take a large dish and place the custard dish inside of it. Furthermore, add hot water carefully in-between the space of the two dishes. Make sure that water occupies 2/3rds of the space. Now place this into the oven and bake for 20-30 minutes. After this is done, let the Royale settle for 20 minutes and cool down. Next, using a knife or a cookie cutter brings the Royale to the desired shape. Some people also add colour to their Royale by adding tomato paste or minced parsley.

Each of the vegetable has to be cut into small half inch dices that ideally should fit into the spoon and then be comfortably eaten. Moreover, there is no specific recommendation for the choices of vegetables. But, during spring time white asparagus and carrots are preferred. The vegetables will have to be boiled till the point they remain firm enough.

Preparing the meatballs and noodles:

Boil a pot full of water and mix the ingredients under the meat ball section. They need to be cooked for 5 to7 minutes.

Also, you will have to boil about 1 and ½ cup of plain wide noodles. Drain the water and keep the noodles separately.

While serving the wedding soup

While serving the soup you must keep the following in mind.

Usually cooked ingredients are placed in the soup bowls and then the hot broth is poured over it. This is done so that the clouding of the broth can be avoided and the soup can remain clear.

You will have to place 4 meatballs and 4 pieces of Royale in each bowl along with 2 tablespoons of carrot and other vegetables and 1/4th cup of noodles. Using a ladle pour 1 cup of hot broth over the soup and finally garnish well with parsley or chives. Another point to keep in mind is that bread is ideally not served with the soup but one can choose to do so.