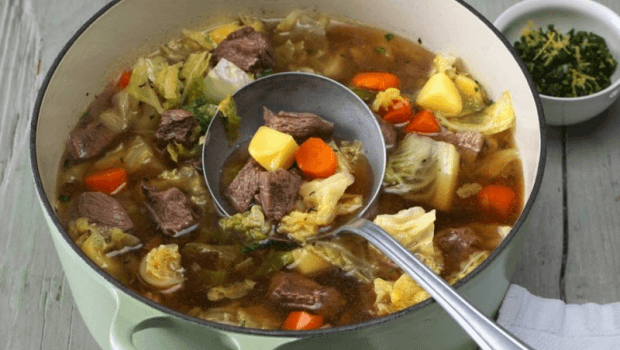 Traditionally, German stew or the Eintopf is prepared by using a large number of ingredients. If one goes into the technicalities associated with the preparation, then it simply refers to the cooking of all the necessary ingredients in one pot itself. There are however, many different regional specialities and version to the eintopf.

Some of its popular varieties are as follows:

Ingredients and the flexibility

In the case of the ingredients, they can include both meat and vegetables and usually while preparing the stew in Germany one uses both of them. Furthermore, there is no particular recipe or restriction associated with the use of ingredients or preparation hence one can be as creative as possible. The German love for meat is quite well known and here as well the chefs use the different varieties such as pork or beef and also grounded beef or chicken. Sometimes, one can also find mettwurst, a variety of sausage in it or the rather famous polish sausages or simply the bacon, which is more frequently used.

Sometimes, instead of using plain water one can also find that beef or chicken broth are used and this is indeed quite popular. However, on the other hand if you are preparing a vegetarian version of the eintopf then straightaway go with the vegetable stock base.

Potatoes are considered as a staple ingredient to the recipe but can also be substituted with lentils or rice. Usually, carrots and onions follow or are added along with the potatoes at the same time. Then go the green vegetables such as the fresh green beans and herbs like garlic. One of the unusual ingredients that you may find is the apple. In the context of spices, the eintopf remains on the minimalist side by simply employing salt and pepper only as a matter of staple. Within the realm of possibilities, fine herbs could be an addition along with some nutmeg and Worcestershire sauce; it is used quite often for the extra flavouring.

The preparation is not always this liberally chaotic. There are much stricter preparative methods and processes as well. Take the example of kohlrabi eintopf. The main ingredient of this version is kohlrabi or the turnip. In addition to the kohlrabi there are: mettwurst and potatoes, the typical ones, are cooked in the bowl. But the more differentiating ingredients are flour and whipping cream, they are first combined together in a separate bowl before being added to the pot along with nutmeg.

You can probably go through any book and look into any tradition, as far as the process of cooking together multiple ingredients or combining meat along with vegetables in a single pot is concerned it will definitely quality to have existed as long as cooking itself. Moreover, this technique also spans across cultural boundaries and tends to be ubiquitous. Upon travelling outside the German boundaries, such preparatory methods often are termed to be a one pot dish.

One of the historically significant stews is the porridges which were prepared for the Roman gladiators. It used to be a combination of mixed grains, broad beans, vegetables and varieties of meats mixed in barley water. Records have also shown the significance of this one pot which was prevalent. Such pots would be placed over an open fire, sometimes without boilers as well.

Lizzie Collingham in her book titled as: The Taste of War: World War II and the Battle for Food, she offers fascinating insights of the War days. She writes that the ultimate Nazi food was the eintopf or the casserole. Immediately after the war had ended Germany and largely Europe was left starving. Therefore, in times like these one would have eaten almost anything. In many ways, slow cooked meals such as the eintopf were designed in such a manner that it would incorporate low quality cuts of meat and make them favourable. Also, it was also a better deal since eintopf, a one pot dish could be prepared in just one pot.

Eintopf is so popular that there exist numerous variations. For instance, in Zurich, the chefs there, initially add cumin and salt to the meat, potatoes and carrots. Then onions and garlic are also included, and finally white wine is added to the preparation along with some quantities of water. The combination of water and white wine make up the liquid base of the stew. Eintopfs preparation is also conducted by placing the pot on a stove; however, alternatively they can also be cooked in a pressure cooker. Furthermore, just in-case a pressure is unavailable one can place an appropriately fitting lid on top of the pot. This will allow pressure to be generated and thus this can substitute the pressure cooker mechanism.

Historically as well, the most common ingredients across the geographies have been – pork, beef, or meat from chicken in addition to an assortment of vegetables which include carrots, peas, beans, potatoes, cauliflower, celery, onions, asparagus, or garlic. For the flavouring part there are numerous options available, but the most commonly used spices include: a range of kitchen herbs such as parsley, lovage or chive and among the other add-ons include: salt, pepper and other spices of one’s choice.

Interestingly, if one happens to be aboard a German crewed ship then the expected meal on Saturdays has always been eintopf. Cooks on such ships are known to prepare this meal by including all the leftovers from the earlier week.

Beans and potatoes, both of them can be considered as a staple of Germany. Moreover, they are definite add-ons to the eintopf too. All the green vegetables and the meat give the stew a nice and uplifting appearance.

The following recipe will take up a total of 65 minutes and will be able to generate 8 servings.

To begin with, if you are using fresh beans then you will be required to clean them thoroughly and place them in a steamer for 15 minutes or till the point they become soft and ready to use. On the other hand, if you are using canned beans then they should be drained and then rinsed by placing them under running water. With that done, place them on the side.

In the meantime, you will be required to take a large non-stick pan. Add oil and place it on high flame. When the oil heats up, depending upon the meat that you are using, either kasseler or ham, you will have to evenly brown them on all side. Now, when the appropriate colours are attained, take the meat out of the pan and place it on the side. In the same pan throw in the chopped onions and stir them thill they attain a nice golden brown colouring.

Next, to the same pan add the potatoes and stir them till the point they get the same brown colouring. When that happens, immediately add the broth and allow it to simmer. Take half of the finely chopped parsley along with the grounded pepper and some of the dried herbs, add them into the broth and neatly stir them.

Now, while the broth is simmering further go on and add the potatoes and onions into it and cook for about 5 minutes. Next, you can add the carrots and let them get cooked till the vegetables get done. Furthermore, you can add the beans and meat into the broth while the broth continues to simmer. In case the broth appears to be thinner than required, you can further add a mixture of potato starch along with water. Make sure that you don’t add more than 1 to 2 tablespoons worth of starch. Alternatively, you can also use flour and water to thicken the broth.

With all of this done, increase the flame and let the broth boil. It is also advisable that you continue to stir the mixture continuously. Towards the end add the seasonings along with salt and pepper. Right before serving, you can add the remaining parsley. Eintopf is now ready to be consumed, it tastes best when served hot.

In an alternate case, you can cook the potatoes separately and when the potatoes are done, you can mash them. Then finally, add these mashed potatoes to the broth to thicken it. Furthermore, you can also add lemon juice or white vinegar to the stew while eating to further enhance the taste.