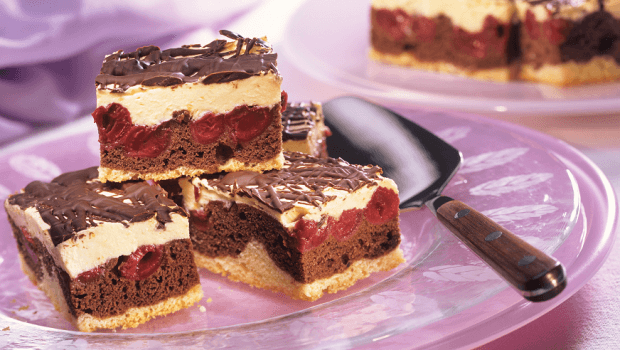 Donauwelle: The wavy delight straight from the land of Danube

Donauwelle or the Danube wave is among the most famous desserts from the Germanic lands. It in-fact holds popularity both in Germany and Austria, this traditional sheet cake is made using sour cherries, butter cream, cocoa, and chocolate. Its appearance creates a swirling effect and the bright and dark layered combination makes it equally irresistible. In Germany it is also popularly known as Schneewittchenkuchen or the Snow White Cake. Furthermore, the topping of the cake comprises of buttercream and melted chocolates. Also, the trick thereon is to place sour cherries into the uncooked batter so that when the cake is ready, they stick and sink together. Therefore, the resultant cake becomes low rising and rich.

It has been said to have originate in the Danube or Donauschwaben region which basically comprises of most of the German speaking countries in the south-eastern parts of Europe. The river Danube starts from the Black Forest region and then flows thorough many countries, racing its way forward towards the East and then finally flowing into the Black Sea. Donauwelle is said to have sprouted here in these fertile grounds. It is now known that Donauwelle was a dish that the immigrants of the region brought with them in the 18th century. They had come here after the Ottoman Empire discharged them from their original habitat.

Some experts have drawn similarities between the pound cake and Donauwelle because of the cakes batter and the ingredients. The batter once mixed and ready, is divided into even halves. One of the halves is darkened using the cocoa powder. Thus, it is able to attain the two coloured texture. As far as finding sour cherries is concerned, they are easily available in packaged forms in a regular super-market. The important thing to remember is that they should be dried and then placed in the batter. The cake gets its unique flavours due to these ingredients and processes.

This is a traditional German cake recipe. You may find certain variations or simple additions to this version in the other surrounding regions. The popularity of Donauwelle has reached far and wide across the globe due to migration and globalisation generally. But there is nothing like it to have the original dessert from Germany in Germany. So, when visiting, make sure to try it on from any of the local bakeries.