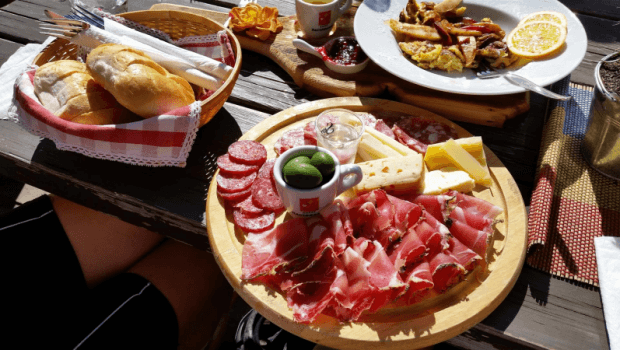 Brotzeit is the classic German appetizing snack which the Bavarians declare as their invention. The term Brotzeit is the German word where Brot means Bread and zeit stands for time. The native Bavarian savory snack which phrases itself to a small meal means 1) That it commonly composes of typical and reasonable Bavarian delicacies and 2) That it is preferred to be eaten comfortably in the beer garden enjoyed with friends and family.

The term Brotzeit is often confused by non-Germans with “Mahlzeit” meaning “To have a sanctified meal!” which is spoken during lunches and mainly in German offices.  The typical snacks that complete the Brotzeit and are served and savored are:

Along with this, there are beverages served to people to complete their snack times such as Weizenbier, Bockbeir, Augustiner Beer, Lemonade, Apple or orange juices, carbonated drinks, etc.  The traditional Bavarian Brotzeit contains the pretzels which are either buttered or seasoned with chocolates or sugars, the cheese, and grapes, roasted or fried cold pork, Bavarian loaf with sweet mustard, potato salad, radish tomatoes and gherkins and some sweet mini cakes for a complete small meal.

To make your breakfast time into a whole traditional German Brotzeit style, follow these simple recipes along with the beverages and savor the down-to-earth taste of Austrian-Bavarian Brotzeit and enjoy with your family and friends.

For Beef in Vinegar and Oil: (Oil Rindfleisch in Essig und Öl)

To prepare this easy beef salad to serve alongside with oil and vinegar dressing:

To make the best and creamy Obatzter as a dip, spread or side serving:

This spread tastes the best on fresh baked bread or as a dip with pretzels and a good cold beer. Consume on the same day of making.

They can be served when you decide to make the Brotzeit sweet in taste and to complete the fusion of sweet and spicy on the platter.

You might have noticed that chives almost goes with every dish and side dish of Brotzeit, this makes it unique and different from others and adds the simple meal to the next level. Enjoy it with friends and family with a nice little beverage. This is truly a great recipe to relish with your dear ones. So the next time you throw a party at your home or it is a family get together, do include this amazing food in the menu. Your folks would love it for sure!