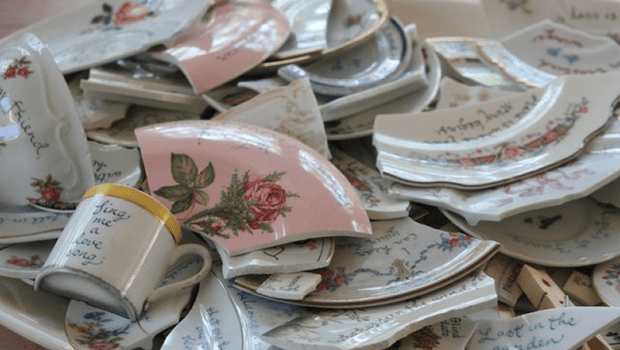 Polterabend: To break for the Unity

Marriages in Germany devoid of any form of tradition paraphernalia are absolutely unimaginable. Various German regions have their very own tradition and custom which may or may not run in consonance with the rest of the country. Some aspects of the tradition such as polterabend wherein everybody breaks crockeries from the table and the bride and groom are supposed to clean the mess together. This might sound different from what one generally observes in an Americanised Christian wedding, well the typical ones from the television. As far as traditions are concerned, they are the sole factors which enable and support the identity of people of a particular area.

Weddings are a day of celebration everywhere. Yes, they are particularly meant to celebrate the union of two individuals but, in a more community and family oriented country like Germany, it is a much larger affair. The starkness of distinct customs and traditions typically are more visible in rural areas.

With the growing multiculturalism everywhere it is only a matter of time when you land up in a German wedding. Silly logics aside, what if you simply get involved in the same, wouldn’t it be better if you know something the very least about the various traditions and customs from the Germanic lands. It sure might help you earn some of the extra points with the ladies.

Cultural traditions do not evenly span the whole of Germany. In the context of the wedding customs, one can see that there are considerable amounts of variations in the various regions. The younger generation as well has grown antithetical towards the old practices therefore most of them these days choose not to follow.

Now, to legalise marriages in Germany, all that one requires is, is a civil ceremony. This civil ceremony generally takes place in the local Standesamt. A Standesamt can be understood as civil registration office within the German administrative domain. This office takes care of all sorts of civil matters such as – recording births, marriages and deaths. Conduction of a ceremony at the local Standesamt is mandatory. The famous church based weddings can then take place post the legalisation of the marriage at any time as is suited to the couple. There are many couples who just opt for the civil ceremony instead of the large wedding. This has sort of become a large trend in the recent times and has to do with the growing tendencies of minimalist living. Moreover, in any case, a small ceremony involving close friends and relatives is almost always held.

Germany is all about and proud of its traditional customs. In the same regard, one has to pay much heed to them when it comes to sacrosanct events, say for example weddings. Within the customs associated with weddings, the standards of these customs mark each and every manner of conduction and extend to all the possible minute details. The wedding ring is one of such minute details which have entire paraphernalia around it. The ring, traditionally and in most cases is made of gold and worn by the bride on the ring finger of her left hand. Furthermore, when the wedding is concluded, the bride takes off the ring and wears it back on the ring finger of her right hand. In the case of men, they always have to wear the wedding band on the ring finger of their right hand. Additionally, you will find that the German couples mostly marry each other in the month of May.

There are no specific instructions pertaining to the attire of the bride and grooms. However, brides generally can be seen dressed in white gowns and grooms in black. In place of a veil, German brides can be seen wearing a tiara or a typical flowery headband. Also, more importantly, their dresses should not by any means have trains.

Sending the invitation is not a simple affair either. The inviter is usually fancily dressed with ribbons and flowers. This individual then goes door to door and extends the invite in person to each and every guest. Furthermore, the acceptance of the invite requires the guests to pin a ribbon on to the hat of the inviter and then offering him or her drinks. All of this has quite a theatrical appeal to it and usually takes the inviter a few days to complete the task.

Family and friends of the soon to be wife and husband, on the eve of their special day gather together and celebrate their new beginning. This party affair is known as Polterabend. Polterabend usually comprises of sumptuous food and traditional drinks and the most important feature of this event is the breaking of the plates and table wear other than the glasses and crystals of course. Finally, both, the bride and groom are expected to clean this mess together thus implying that they can work together happily and deal with any of the possible circumstances. This custom is also meant to bring forth good luck to the soon to be the married couple in addition to symbolically preparing them for the various trials that life has to offer.

Another typical feature of the pre-wedding paraphernalia is the bachelor parties or as is said in the German language, Junggesellenabschied. This most usually takes place a few weeks prior to the wedding in any of the local pubs.

After the wedding ceremony is completed all the loved ones go ahead and throw rice as the couple exit the church hall. It is further believed that the number of grains that stay in the hair of the bride, the couple has that much number of children.

As the bride and the groom exit the church, they are made to walk on a path on a particular laid path which additionally blesses them with hope, luck and fertility. All the friends and loved ones along with the bride and groom sit in their cars that carry a white ribbon which is handed out by the bride once they exit the hall. Thus a procession kind of a thing passes through the town. The honking of the car is another added feature which takes place while the procession is underway and one can choose to honk back, it is optional. Occasionally, the couple is also made to saw a log in halves. This is meant to further symbolise the both of them overcoming challenges together.

The end point of this procession is usually the location of the reception. The main feature of the reception is the waltz. The newlyweds take the lead and dance first which is followed by a second event wherein the bride and her father dance together along with the groom and his mother and the groom’s father dance with the mother of the bride.

Sometimes, the family members or friends of the bride and groom formulate a wedding newspaper which is composed of the various pictures, usually the mushy and embarrassing ones in addition to stories pertaining to the bride and groom. Such wedding newspapers are then sold at the wedding reception and all the collection is then set aside and then given to the couple as a means to compensate their honeymoon expenditure.

Wedding traditions in Germany differ from region to region, however, the following is a list of some of the highlights:

The many different regions of Germany

In the southern parts of Germany for instance, a customary toast is an integral part of the reception ceremony and is conducted with a bridal cup or a brautbecher. This cup usually is made of pewter or crystal and has the engravings of a maiden holding a small cup above her head. Either champagne or wine is added to the cup and both the bride and the groom drinks their first toast from this cup simultaneously, symbolising an everlasting union.

On the other hand, when you travel in the lower Rhine region which borders with the Netherlands, three weeks prior to a wedding, there is a ceremony known as letsch that takes place here. It concerns with a public proclamation of the couple to wed each other. First of the three proclamations takes place in the church whereon the congregation moves to the bride’s parent’s house, furthermore, here a mini party sort of a thing takes place. There are no particular invites issued for the letsch, more so, it is open for one and all.

The tradition of Maschkern is another such custom which takes place in the Bavarian region of Germany along with the neighbouring parts of Austria. The term Maschkern is derived out of the word ‘maske’ which in the Anglophone world is used while referring to masks or maskieren, further implying to ‘wear a mask’. Friends of the bride and groom dress up and enact some of the instances from the lives of the soon to wed. The recounting event is compered by a harlequin who stays from the beginning till the very end. One of the most fascinating figures in this theatrical dramatization is that of the ‘old flame’. She is the one who repeatedly makes efforts to regain the heart of the groom, even at the very last minute.

Furthermore, in the regions of Münsterland and Emsland just after the day of the wedding, a rooster is brought about. Back in the day, this custom required the newlyweds to walk along with the rooster and later on the same rooster would be cooked and eaten. This custom has sort of transformed wherein a symbolic wooden rooster is simply placed inform of the couple.

Weddings in Germany today have also started to incorporate numerous games and engagements which are not indigenous to the lands. This is indeed the result of the influences from the Americanised films. As a result of the more popular international customaries couples in Germany as well have started to alter the thematic of their weddings by excluding some of the traditional features such as Polterabend. Instead, they have stag parties or hen nights where things do get out of bounds sometimes.

The custom of throwing the wedding bouquet is not a part of the Germanic tradition but originated in the United States and Central Europe. Similarly, numerous other elaborations which typically were a part of German weddings have started to disappear.