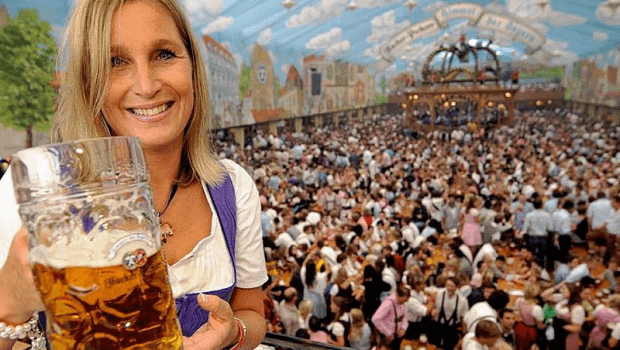 The largest Volkfest or folk festival comprising of a beer festival and a travelling funfair in the whole world is known as the Oktoberfest. It is an annual event that takes place in the capital city of Munich of the Free State of Bavaria, Germany. The festival typically begins in mid-September and culminates either on the 3rd or 4th of October each year.

Oktoberfest Munich is locally known as the Wiesn and is named after the Theresienwiese, the regional name for the fairgrounds. The festival has become an integral part of the heritage and cultural presence of Bavaria and also Germany at large. The festival has become so popular that millions of people flock to Munich each year to simply taste the flavoursome food, beer and music of the land. Other countries as well have started their own version of the Oktoberfest, but they sure are not as popular as the Oktoberfest itself.

Originally speaking the Oktoberfest Munich was organised for a total of 16 days, ending on the first Sunday of October. However, in the year 1994, it was modulated with regards to the reunification of Germany. In any case, the festival usually extends to the 2nd day of October and additionally the 3rd day is celebrated as the German Unity Day. Therefore, the festival also continues.

The festival has become synonymous with beer and music whereas it is not the primary reason for the celebration. During the Oktoberfest Munich very large quantities of the famous Oktoberfest beer are consumed which are specially brewed for the occasion. Take for instance the festival of 2013 where 7.7 million litres of beer was consumed. Apart from the dancing and the drinking the festival also provides ample scope for families and particularly children to enjoy and have a great time. One can enjoy the tastes of the famous German delights such as – Hendl or the famous Bavarian roast chicken, Schweinebraten or the roast pork, Schweinshaxe or the grilled ham hock, Steckerlfisch or grilled fish which is served on a stick, Würstl or sausages in addition to the Brezen or pretzels, Knödel or potato dumplings, Käsespätzle or the cheese noodles, Reiberdatschi or the potato pancakes, Sauerkraut and the Weißwurst or the Bavarian white sausage.

Theresienwiese is a massive open ground space located in the borough of Ludwigsvorstadt-Isarvorstadt in Munich. This holy ground performs the functional role of being the official location for the Oktoberfest Munich. The ground has roughly occupied an area of 420,000-metre square or 4,500,000 square feet.

One can find the Theresienwiese being bordered by the Ruhmeshalle along with the Bavaria statue that symbolises the being of the State of Bavaria in the west. The opposite side, in the east, the ground is bordered by Esperantoplatz. The Esperantoplatz is a city square, popular for Esperanto, a constructed international auxiliary language which was first mentioned by L. L. Zamenhof, a Polish ophthalmologist in his book Unua Libro in the year 1887. This square is also famous because of the memorial which was constructed commemorating the various victims who perished during the 1980 Oktoberfest bombings. The St. Paul towers are located and starkly visible in the east. For travelling around the Theresienwiese, visitors are required to take the Orbital Road.

The official site of the festival was named after Princess Therese of Saxe-Hildburghausen, the bride of the Crown Prince Ludwig I. In the year 1810 their wedding took place on the same ground and later on a public festival was organised for celebrating the royal union. Oktoberfest, in fact, is conducted to mark that very moment. Additionally, the ground also plays host to two other festivals, namely – the Winter Tollwood or the winter festival and the Spring Festival. Also, in the month of April each year, the largest flea market in Germany is also organised on the very same ground.

To locate the ground, you must travel in the southwestern direction of the city centre. The stop has its very own station on the U-Bahn train network system. Hackerbrücke or München Hauptbahnhof or the Munich central station is the closest station on the S-Bahn network.

The Oktoberfestbier is also known as the Märzen or Märzen-Oktoberfestbier. These varieties are authentic in all the technical senses and brewed within the confines of the city of Munich. Moreover, these varieties are also not allowed to be brewed anywhere else and are the brewers are made to follow strict guidelines pertaining to the production of the beer. The other kinds of beers are furthermore not allowed to carry the same name, instead, they who emulate the traditional Oktoberfestbier are required to be categorised as the Oktoberfest-style beer.

The Oktoberfest beers are in fact a consequence of the stronger bre3wes which are traditionally produced in the spring time and also are in any case not allowed to be brewed in the fall. Hence, these brews are called as Märzen or March beers. The production of such brews takes place in specially modified caves which are filled with ice or certain kinds of cellars. All of this is necessary for the perfect ageing of the Oktoberfestbier. Typically, the ageing period lasts for three to four months. As a result, these brews carry a district deep amber colour and their alcohol content ranges between 5 and 6.2 %.

Historically, the Bavarian tradition of brewing can be traced back to almost five hundred years back in time. At that point in time, the region was suffering on the lines of quality control. It was increasingly becoming difficult for the Bavarian administration to monitor the numerous brewers and their produces. All of this was particularly challenging with respect to the summer brews. The brews of this time often ended up tasting sour or carried a medicinal tinge and nobody had an idea as to why this was happening.

The local knowledge system pertaining to the brewing of beers was limited to a certain degree. Brewers did have an idea that beers were better brewed between October and March. All the brews of this time showed a much cleaner taste and were appetising. The brewers, of course, did not have an elaborate technical support system, unlike today. It has been made clear that the sole reason behind the above phenomena was the geographical location of Bavaria. During the time period between the months of October and March the regional temperature drops and as a result harmful microbes which would have otherwise spoilt the brews get slowed down. The foothill region of Bavaria is therefore among the best locations for the production of beers.

At that time this information was available but devoid of all the supporting technicalities. The result of such knowledge was indeed crucial and the brewers of Bavaria keeping all of this in mind adopted a certain strategy through which they could ensure the availability of beer throughout the year. Brewers began to work overtime during the colder months and thus came about the Märzen-Bier in Germany. Its colour ranged between copper and deep amber and alcohol percentage points varied between 5 and 6 %. These brews came with full bodies and a typical malt-accented finish.

Production was the easier part, the most challenging part proved to be storage, especially during the summer months. The brewers began to store the fresh brews in casks which were then placed in cool cellars which sometimes were located in the caves of the nearby mountains. These caves were rather perfect because they were often covered with the ice from the previous winter. Such brews were able to mature perfectly because of the greater hop and alcohol content which were further supported by the ideal weather conditions. When the season changed from summer to fall the actual maturation of the beer takes place. The required maturity is generated when the hops mellow down and the malt like character of the brew comes about in its full character.

In the month of October the harvesting of this year’s grains gets completed and it is also the time when the previous year’s Märzen beers have to be consumed. This is typical because the casks could then be reused for the new batch of production. Now, keeping all of this in mind, a certain fact pertaining to the conceptualization of the Oktoberfest also becomes clearer. Look at the time period when the Oktoberfest is hosted, it matches evenly with the new brewing season.

The brews and styles

The Märzen-Oktoberfest has come about as a result of the numerous years’ worth of developments in the regional brewing industry along with the art of brewing. Most of the changes came about in the year 1841 at the hands of the two brew masters – Gabriel Sedlmayr, the owner of Spaten Brewery of Munich and Anton Dreher, the owner of the Dreher Brewery of Vienna. The both of them were responsible for the coming up of the Märzen-Oktoberfest’s grain bill. In addition to that their contribution also included the inclusion of a composition which was slightly caramelised and its grist was of that of a pale malt. It particularly came to be known as the Vienna malt. In Munich the resultant brand new variety of beer was continued to be called the Märzen but carried a new tag line – gebraut nach Wiener Art, when translated it becomes: brewed the Vienna way. On the other hand, in Vienna, it came to be known as the Vienna lager.

Later in the year 1842, Burgher Brewery of Pilsen introduced the blond coloured Pilsner lager. Moreover, the brews of the Vienna way were much different than the newer Pilsner simply on the basis of the colour. However, their way of manufacturing remained the same as that of the Munich way with a significant emphasis being put on the multi-step decoction. This involved the use of caramelised malts for the building of the body along with the effective nutty sweetness. The preparation would require longer wort boils and a lower hopping rate so that the brews can preserve their dominant malty character.

The influence of the scientific brewing methods of the 19th century was considerable. It particularly included controlled malting, management of yeast, beer filtration and particularly refrigeration. As a result, beers could be enjoyed at any given time of the year. Mass production of beer could be avoided in the months of spring. Moreover, the famous March type of beer was only produced only if the requirements proposed.

The largest volkfest requires some of the largest tents to accommodate the people and the celebrations. You can expect some of the most bizarre stuff, such as a pretzel which is 15 inches in diameter along with an upbeat brass band playing Bavaria’s traditional music in addition to many of the regional and international chart busters. At around this time, there will be so many people dancing and singing around that it would be maddening and exciting at the same time.

Following is a list of the various beer tents at the Oktoberfest:

In addition to the above beer tents which are comparatively much larger in size and are able to house the greater number of guest, there are a few smaller tests as well. Being smaller does not mean that they compromise on the atmosphere. On the other hand, they can very well compete with their larger counterpart and give them a run for their money. These smaller tents are also equally popular if not more among the local folks.