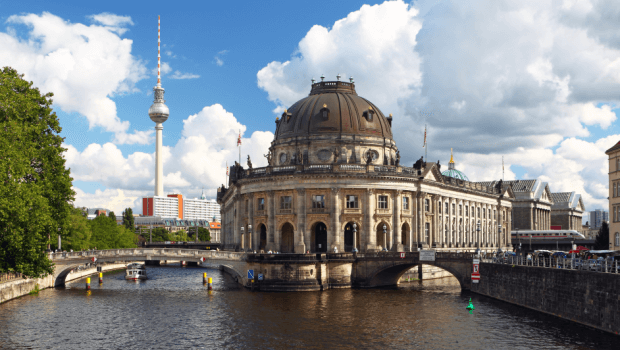 Museumsinsel: A walk through History

Museumsinsel or the Museum Island is the name given to the northern half of an island located in the river Spree. This is where the 13th century town of Cölln, which was Berlins sister town, was located. Here you will find a complex of museums which are of international importance and are part of the Berlin State Museums. Since the year 1999 it has been regarded as a prominent cultural location and an archaeological ensemble for UNESCO World Heritage.

Here you will find clear marked references to the Age of Enlightenment and thereon the changing histories. Each museum resembles civilizational traits and development in museology. There are five museums which were built in between 1824 and 1930 approximately and display niche Prussian architects.

Museumsinsel is located in the Spree River and falls in the administrative district of Mitte of Berlin. The island can be accessed through trains, busses and trams.

The King of Prussia, Frederick William IV on 1841 dedicated the island, which initially was a residential area; towards the arts and sciences. Moreover, 1797 is when the first ever exhibition hall was constructed in the complex. It was erected on the suggestions of the archaeologist Aloys Hirt under the guidance of Wilhelm von Humboldt. Nowadays, the museums and the island in general is managed by Berlin State Museums. The unique complex serves purely musicological intents and is brilliantly able to highlight town-planning and its amalgamation with the urban fabric. It is Berlins very own Acropolis.

During the Middle Ages this section of the Spree Islands comprised of many marshes. Furthermore, during the 13th century, on the southern side of the island, the city of Cölln was established. Later-on major change came in the 17th century after the left side of the Spree was channelled that today’s Kupfergraben could arise.

The island has been of many specific uses throughout history. From being a conservatory for exotic trees and plants to being put to economic uses. During the 19th century the island played a crucial role in advancing the commercial endeavours of the region.

During the Cold War the city was subjected to a division and thus the collections from Prussia also got separated. But with the German reunification the collection was brought to a complete again. However, as the tragic World War II was beginning to end, the Allied troops removed most the valuable art pieces and they still remain not returned.

The complex apart from the museum buildings also comprises of the Lustgarten Park and the Berlin Cathedral. In the southern side you can also find Stadtschloss and the Palace of the Republic.

Furthermore, during the 1990’s under the directorship of Wolf-Dieter Dube and after a lot of convincing, and after millions of Euros were pumped in, the restoration and modernisation work finally began. It was later that same decade that UNESCO would declare the Spree Island as a World Heritage Site. Much of the due recognition was granted to the Island thereafter.

The complex consists of the following museums:

‘On the Museum Island’ was a song by a folk artist Emmy the Great. Of-course that is not enough for you to visit the island, but, this is one almost city which just cannot be explored through photographs. Exploration does require a certain amount of time and patience and definitely not for the faint hearted. The mesmerising artefacts by themselves represent different parts of history and speak out the realities of their time. Museumsinsel is not alone for the history buff. You can begin with a boat ride and encircle the islands around and then begin your journey though the history of Europe.

The phenomenal structures on the island were the result of the Age of Enlightenment (18th Century Europe). Museumsinsel houses five museums and they were built between 1824 and 1930. Each museum building is a result of ingenuity, vision, and developments in the process of museum design. The design is representative of the organic connection it tries to build between art and its house. By coming here you will understand how today is formed and the relevance of the time that has gone by. In addition to the 5 museums the complex also houses:

There is also a library for public reference. You can find literature on the existing displayed items and historical documentations in and around the sculptures and arts. The library is equipped with an intelligent library specialist system which houses record of all the literature collection.

Learning is a lifelong process and Museumsinsel is a stepping stone, though an important one. The museums here by their own right are architectural marvels and represent passionate visionary individuals who through their art have influenced history. Knowing by seeing leaves an impression on the young minds and what better way to draw inspiration than visiting any museum for that matter. At Museumsinsel history quite literally speaks to you.