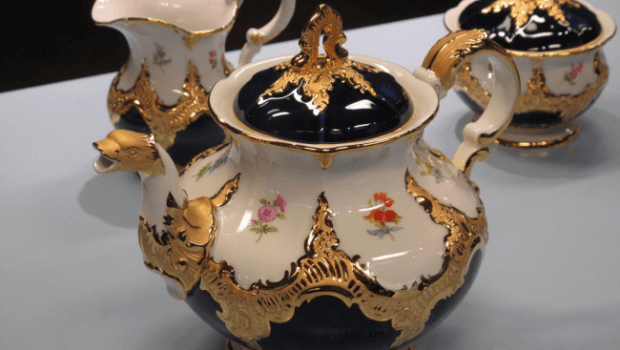 Meissen porcelain or Meissen china was first developed in the year 1708 by Ehrenfried Walther von Tschirnhaus. Thereon it has attained the status of being a material for the tasteful and luxury. Its history is laden with secrecy, deceit and imprisonments, and designs that were commissioned only for the kings.  It is a very important part of German heritage and European endeavours.

Porcelain making had essentially been a Chinese tradition and it was only due to Europe’s colonial endeavours and the plurality of the many voyages that they had been embarking upon that this art could reach their shores. It was the Yuan Dynasty (1280 – 1368) which first introduced porcelain and the Europeans spent many sleepless nights discovering its secrets since the time they first saw them in 17th century.

In the beginning porcelain trade had immensely facilitated the growth of Chinese trade and was categorised as an exquisite commodity. The Dutch East India Company had taken over the charge of exporting porcelain from China and Japan towards the European shores.

With the arrival of 18th century many alchemists had tried their fates in producing gold and other exotic materials. It was Ehrenfried Walther von Tschirnhaus, a mathematician and scientist who at the time was experimenting with the production of glass and porcelain as well. He came in contact with Johann Friedrich Böttger, the famous alchemist of King Augustus II of Poland. Böttger at that time had made numerous failed attempts to create the sorcerous stone. Moreover, after their first few meetings Böttger announced to King Augustus that he can manufacture porcelain. Though, it is also suspected that Tschirnhaus was not quite inclined towards their deal, but anyway continued working with Böttger. As it so happened was that Tschirnhaus suddenly died in the month of October 1707 and the recipe thus went to the hands of Böttger. He refined the formula with the help of dome Dutch co-workers and thus came about the first Meissen manufactory with the help of King Augustus in 1709. Böttger’s laboratory was then moved to Albrechtsburg castle in Meissen and production started officially in 1710.

The first set of productions was refined but extremely hard. It was known as Böttgersteinzeug. It was also characterised by a certain crisp definition in its mould-cast applied details, the body could be polished to attain the desired gloss right before using fire. The designs of the moulds were inspired from the Chinese ceramic examples and Baroque silver shapes. This and the other products that followed began to be marketed in 1713. The initial designs were in the imitation of oriental patterns but they slowly started changing.

It was only a matter of time and superior qualities were thus attained by Böttger’s further experimentation but problems kept on arising at the time of painting and firing. Later on in 1723 Johann Gregorius Höroldt would perfect the methods to certain extent and introduce multi-coloured enamelled painting. Thus the classical phase of Meissen porcelain began with a wide range of colour schemes. Moreover, today also you can easily find the techniques of Höroldt as the basis for ceramic paints. Friedrich August Köttig is the one who had introduced the famous Meissen Blue in the same regard. Designs imitating landscapes, port scenes, animals, flowers, also courtly scenes and chinoiseries became quite popular. There were also the Kakiemon vases and the tea wares of kilns in Arit, Japan – these were designed to imitate the flowers of the Indies. Some of the most fascinating designs which became a pallet addition were the one with the paintings of Watteau. Some of the products also had solid glazed colours.

During the first half of the 19th century the orders were pouring in heavily and the factories had to work overtime and despite that they were not able to cope up. Moreover, there were also difficulties due to the Napoleonic wars at first and then the tensions of the World Wars. In addition to those, there was also a significant decline in the number of employees. There were many German factories that were shutting down and the Meissen manufactory survived the war and by 1831 it was institutionalised as the property of the state and was thereon going to be run by Saxon Ministry of Finance.

From 1814 to 1833 Carl Wilhelm von Oppel was entrusted with the charge of the factory and he made considerable amounts of changes in the artistic, technical and commercial areas.

In 1863 the prediction facility moved to a new building complex in Meissner Triebischtal. The porcelain trade evolved and so did the demand. With the restoration of the company in place and the artistic concerns of the manufactory developing – all of these enabled the traditional porcelains to stand out. Porcelain design involved inspirations from the Baroque and Rococo. The Paris World Fair which was organised in 1900 allowed the enthusiasm for porcelain to grow.

Erich Hösel assumed the position of the head of modelling in 1903. He is responsible for the revival and restoration of the old styles and reinterpretation of the 18th century models and infused them with the tradition of Art Nouveau. Moreover, after 1933 due to contemporary indoctrination process the artistic vigour was immensely hindered and a few of the progressive artists who were given free reign during the Weimar regime faced banishment.

After the German reunification process the ownership of was restored at the hands of the State of Saxony. Today, even though the prices of their products are quite high they have become a matter of collectables.

Many precautionary measures were undertaken to protect the famous trademark designs and thus the Albrechtsburg was used for this purpose. That is storing the secrets of the manufacturing processes, particular the manufacture of the white gold. Also, the administrators made it sure that only a handful of workers knew about the secrets in and around the production. It is due to these reasons that Meissen was able to maintain its monopolistic position on the hard paste porcelain in Europe.

In an almost dramatic turn of events in 1717, Samuel Stöltzel sold the secret recipe which involved the use of kaolin or china clay and thereon competition emerged in Vienna the same year. Furthermore, by the time it was 1760 almost thirty porcelain manufacturers were operating in Europe. But, most of them were involved in the production of frit based soft-past porcelain.

Now, to retain their customer base, Meissen came up with certain markings which were initially painted on their products but in the due course were fired up right on to porcelain in underglaze blue. All these markings were eventually replaced since 1720 with the cross sword logo which was based on the symbol of the Elector of Saxony as Arch- Marshal of the Holy Roman Empire. Even the luxury watch maker from Germany, Glashutte produced a line of limited editions which were hand painted using Meissen porcelain dials featuring the trademark crossed swords logo.

Porcelains are extremely delicate and the restoration works conducted on the Meissen pieces rarely deplete its value. However an extensive restoration process might damage the valuation considerably. Today, these are quite rare and considered to be items worth collecting.