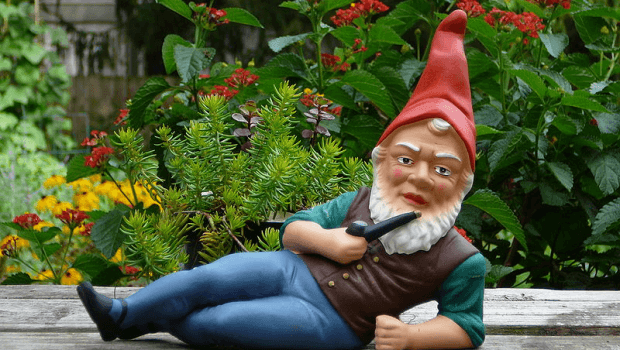 Gartenzwerg: The Protectors of Gardens

The Gartenzwerg or the garden gnome is a traditional figure which is a kind of humanoid creature in a much smaller figure. It is typically presented as a figurate that wears a pointy hat and is usually found in the lawns of the German household.

The origin of the Gartenzwerg dates back to the 19th century wherein they were popularised as garden dwarfs or Gartenzwerge. In the English language, the word –gnome is an addition which was made in the 1930s and was so because of the reference to a kind of ‘garden statue’.

Placing statues in the gardens is a common feature of European households. Moreover, this so to say tradition began way back during the time of Renaissance. The most popular figurines depicted the gobbi which in the Italian language refers to dwarfs or hunchbacks.

One of the most popular figures was produced by a certain Jacques Callot. He is believed to have had created nearly 21 exclusive designs for the gobbi which carried intricate engravings and printed patterns way back in the year 1616.

Later on, by the 18th century, such figures began to be created by using porcelain. It is indeed interesting to know that such porcelain house dwarfs remained extremely prevalent throughout the 19th century. In addition to that, gnomes were also crafted using wood in Switzerland, especially around the town of Brienz.

Amidst all this creation and marketing, the very source of the origin of the gnomes became lost. Therefore, many of the regional manufacturers began to contest amongst themselves and claiming the ownership rights. Furthermore, through careful evaluation of the various evidence it has become clear that that Baehr and Maresch of Dresden were the ones who manufactured the Ceramic based gnomes for the first time. The major indication came from the storehouse records of Maresch, they had the Gartenzwerg in their stock profile in the year 1841. Further, their manufacturing increased exponentially beginning from the 1860s when the neighbouring towns of Gräfenroda got involved.

Another individual by the name of Philip Griebel also got involved in the business and started to produce decorative items out of terracotta animals. The basis of such figurines was local myths and legends which surrounded the gnomes. As per the local beliefs, the gnomes would only come out during the night time and beautify the gardens, so to say. The spread of the Gartenzwerg has more to do with the beliefs that people hold within and not the product alone.

In the meantime, Germany became famous for its ceramics. This tradition began to spread across the neighbouring states of France and England. Moreover, these regions in their own right were pretty much famous for their authentic and unique garden designs. So much so that, many of the aristocratic families would hire famous garden designers from all over the world to decorate their very gardens and parks. Numerous individuals also started adopting gardening as a serious hobby around this time period. Many of the gardening books that one can find today have their sources which date back to the late 18th and early 19th centuries.

With time the industry prospered and innumerable small and large manufacturing units mushroomed everywhere in Germany and its neighbouring areas. When the industry entered the 20th century it was met with great amounts of difficulty because of the World Wars. Many of the producers and their factories directly became involved in the production of arms and ammunitions back then and therefore the production of Gartenzwerg had to completely be stopped. Due to this very reason and the destruction of the wars, most of these industries moved to Poland and China. As per a certain estimate, there are approximately 25 million Gartenzwerg that can be found in Germany.

The 10th Baronet Sir Charles Isham is famous because he was the first to have introduced the gnomes in England back in the year 1847. He is believed to have bought nearly 21 terracotta figures from his trip to Germany. Today only one of the original 21 survives and can be found on a display in the Lamport Hall. This figurate also carries an insurance that amounts to 1 million pounds.

He lived between 1592 and 1635 and was a well-renowned printmaker who belonged to the baroque tradition. Callot also held the position of a draftsman in the Duchy of Lorraine. It was a state which functioned independently and was located on the north-eastern border of France. The Duchy was also quite close to Germany which was towards its southwestern borders and also overlapped the southern sections of the Netherlands.

When one particularly talks about the ‘old masters’ of print, Callots name features with a great amount of prominence because of his contributions to the very field. He is the one who chronicled the ethos of his age by creating more than 1,400 etches. These works famously featured life-like images of – soldiers, clowns, drunkards, Gypsies, beggars in addition to the life in the court. There were also images from the performative lives of religious figures a and military functionalism along with extensive landscapes in the background of such images.

Jacques Callot is most famous for the development of the échoppe. It was an innovation in the etching tradition which involved the creation of swelling lines and engravings through the use of slanting, oval sections which were created at the end of the needles. Furthermore, he also went on to improve the processes involved in etching.

The importance of Gartenzwerg in Pop culture

Gartenzwerg or garden gnomes have recently become quite popular when it comes to cinema and advertisements. For instance, take the examples of the films, Amélie and Gnomeo & Juliette. Gnomes played a significant role in these ventures.

Another instance from the contemporary times involves the Austrian Socialist Party and their usage of the garden gnomes in their election campaign. There were nearly 20,000 gnomes used in the campaign and were also made to carry signboards which read the parties slogans. This instance became famous by the name of ‘Coolmen models’.