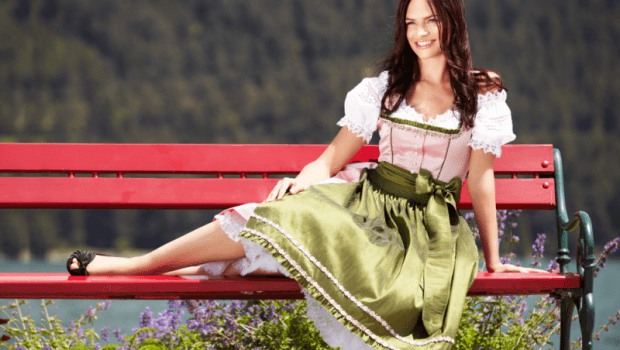 Dirndl is not only a matter of tradition in Germany but also for other neighbouring regions such as Austria and South Tyrol. In fact if one is to go micro locale specific, then, in that case, the dirndl is a traditional type of clothing for women of the peasants of the Alps. These dresses are typically characterised in terms of it being light, circular and of that of a cut dress.

A dirndl has often been described as a dress which can be fun, is about femininity and beautifully flirty. Due to these features, this dress has been able to advance from being a farmer’s work attire to becoming the elegant, high modern, fashion showstopper.

Within the purview of popular culture, the dirndl was made to stick in the public eye by the film – The Sound of Music. The basic components of the dress are skirt, bodice, apron and a blouse. Moreover, these elements singularly might sound simple but are far from it. A certain degree of veritable science is involved in dirndls cuts, fabric choices, colour schemes and embroidery.

The most striking feature of the dirndl is the wide skirt which is attached to a Leiberl or a fitting bodice along with an apron that more often than not has a hidden pocket and then finally a dirndl blouse. As far as the placement of the skirt is concerned it can either be of a high waist or a low waist. Furthermore, the length of the skirt completely depends on the fashion trend one prescribes. In the context of the bodice, since the 1930’s it comes sewn to the skirt itself earlier, it used to be a distinct item altogether. It also comes in a variety of styles – necklines can be round, square, low or high and for the purpose of fastening them, that can be done using either buttons, hooks or ribbons.

The blouse is an important element of the dirndl. In the usual case, it can be very short ending above the waist or be long, or carry sleeves that are puffed. The necklines can also vary and be made up of white cotton or linen-based materials. The main purpose of the blouse is to accentuate the style of one’s dirndl. Today, among the various choices available there is hand embroidered pieces available in addition to the generous usage of ruffles and laces, and there is the simple straight sleeve also there to choose from.

Lastly there comes the apron. Its purpose has been to protect the dress which is worn underneath. However, in today’s time, the apron has attained a purely decorative sense. One can find aprons which are suitable for daily wear as well as those which are meant for various festivities.

One tends to generate certain images when certain words such as Germany are heard. The dirndl is definitely one of them. However, on the contrary to this straight assumption, the tradition of wearing dirndl is not all-pervasive. In fact, it is more centred in the Bavarian region. Traditional dresses such as the Lederhosen and Dirndl more often than not are limited to certain occasions and do not conform to the daily pattern. Moreover, with the recent rise in demand, Lederhosen and Dirndls have been made available in myriad varieties. You can find some of the high fashion brands producing dirndls which are quite intricately elegant at the same time they are also available for every other pocket size. In any case, they truly do not feature in the everyday lives of Germans at large. In Bavaria, this case might be totally different. There are some hard-core enthusiasts who would wear their traditional dress no matter the occasion.

If one is to consider the stories behind the name – dirndl, in that case, it was originally used while referring to a young woman or a girl. Back in the day, the dirndl was fairly limited to the Alpine region and was made using lighter materials as compared to the ones used today. One of the most traditional variants included dirndls which had skirts going to the ankles. In the rural areas, the older women do quite regularly adorn them citing the importance of their heritage and customs. The tying of the ribbon also has a distinct way which is interestingly dependent on one’s status. To further illustrate:

These means and ways were more common and were the customs of the more feudal times. Today in the case of our liberal world where rights and social positions of all the sexes are constitutionally mandated to be at par, such mannerisms are on a decline. Lederhosen and Dirndls thus become limited to special occasions such as weddings and October Fest.

A bit of History and the Contemporary

Oktoberfest is probably the only year when one can see the Germans all dressed up in their traditional ways. You can see lederhosen and dirndls featuring a whole range. Fashionistas truly leave no stone unturned when it comes to the sheer variety. These dresses had not witnessed any form of change until recent times.

Till about the 16th century, the farming community along with individuals from the lower economic strata would particularly wear clothes which were grey or brown in colour. Apparently, work clothes were somehow meant to be of those colours and the hues of blues were only worn on Sundays. Thus, that particular time conformed towards having two kinds of clothes, the first were meant for work and the ones that were meant to be worn on Sundays or on days of festivities. In this very categorisation comes the native dresses of Tracht and the folk style – dirndl. It has also been found that the dirndl is worn by people living not only in Bavarian Germany but also in Switzerland, Liechtenstein, Austria and South Tyrol. The one connecting factor between these regions is the Alps.

Historical records suggest that the lederhosen and dirndls started becoming popular only after the 1800’s when the towns and cities started witnessing large scale migration from the countryside. However, they apparently realised that the lederhosen and dirndls are rather uncouth and not meant for the cities. This is probably because the higher one scales on the social and economic ladder the less one desires to be seen in the manner of tradition.

Towards the end of the 19th century, the Bavarian people realised that their heritage and tradition was meeting its untimely death in the race to modernity and populism. Hence, they ingeniously materialised the Trachtenvereine or a traditional dress club. Though, such gatherings had a limited scope as the people who joined in belonged to the opulence stricken multitudes and were rather only interested in the ornate versions of the attires. Moreover, these clubs were, in any case, able to promote cultural norms with a reasonable effect. Some of these clubs are even active today and is usually open to one and all.

Another matter of confusion has been the difference between tracht and dirndl. They differ in the following ways: