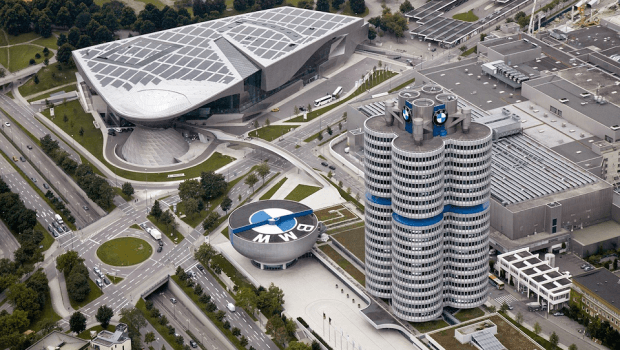 There would only be a handful that would not recognise the famous circular blue and white logo of BMW (Bayerische Motoren Werke or Bavarian Motor Works). Part of the legendary “German Big 3, this German automobile company was conceived in the year 1916 by Franz Josef Popp (others being Audi and Mercedes-Benz). Its headquarters are located in Munich, Germany. BMW is among the most admired and well respected brands in the world.

The company also owns Rolls-Royce Motor Cars, and Mini Cars. They produce motorcycles under the name of BMW Motorrad, and BMWi is a sub-brand which caters to the research and development of electric cars. The German automaker has managed to influence popular culture and capture the imagination of many across the globe.

History of the company:

Karl Friedrich Rapp in 1913 constituted Rapp-Motorenwerke first as the company which manufactured bicycles near Munich. Later on the company gave birth to Flugwerk – the aircraft production unit of the company. They started by manufacturing their own variety of airplane engines. During the same time Gustav Otto joined Rapp and they both created the Gustav Flugmaschinefabrik. Though, this duo was not going to last a very long time, but it is important to mention that they both did a considerable amount of work for the company.

The company saw a lot of business coming in during World War I. At this time they produced their flagship V12 aircraft engines but there were problem concerning reliability of the engines due to excessive vibration. Though the modified version of the same engine was quite successful and set many records. It is rather fascinating to know that by the year 1927, the company held nearly one third of the aviation records of the time and as the years passed by there came in more number of records.

Furthermore, as soon as World War I ended (1918) BMW ceased the production of aircraft engines and moved to manufacturing motorcycles in 1923. This was due to the Versailles Armistice Treaty. Once the restrictions were lifted, the company resumed the production of motorcycles in 1923 and later on followed it with automobile production in 1928-29. Based on the Austin 7 model of the Austin Motor Company (Birmingham, England), BMW produced its first ever automobile and named it as Dixi.

Moreover, until World War II aircraft engines, motorcycles and automobiles would be BMW’s main products. Just around the time when the War ended not only was their Munich plant heavily damaged but also the US army had asked them to dismantle their plants. Furthermore, in the interim time period they were also asked to repair the Allied army’s motorised equipment’s. Amidst all this turmoil the first BMW bicycle came to life.

It took them a little while to recover but BMW returned with quite a bang. After nearly five years of absence and almost after a period of two decades they introduced an all new motorcycle in New York. It was to become the famous R68 model.

Towards the end of 1950’s BMW faced financial difficulties and it was with the help of Herbert Quandt that BMW was able to sail through. Since 1959 the majority of the company shares are owned by the Quandt family.

Through the 1960’s and 70’s BMW grew and acquired a lot of companies from Europe and America and launched many of its famous models like the ‘sporty sedan 1500’ and many others. It was during the first half of the 1980’s that they started developing a new formula 1 engine and renewed many of its older models such as the 5 series. Its iconic M3 model was also created around the middle of the decade along with the luxurious 7 series E32. Till this time the Bavarian carmaker had become a well-established global player and was aggressively expanding across continents.

During the early 1990’s the company bought and further took control of many companies in the United States and Germany. The year 1993 is quite crucial in the carmakers history because it retrofitted the 3 series with a new body version and gave new life to its ultra-luxurious 8 series line with a new v8 and v12 engine variants.

During the 1995 Le Mans 24 hours’ race, McLaren F1 GTR which was equipped with the super powerful BMW engine won the race and reinstated the company’s capacities and reliability. Also, in the latter half of the decade, specifically in the year 1998 during the Paris-Dakar Rally of that year, BMW returned after a 12 year absence and competed in the classic race with its heavy-duty motorcycle F650. The next year BMW saw the strongest motorcycle sales in its recorded history.

Into the new millennium

BMW AG entered the new millennium with a lot of wisdom from its past experiences. The company decided to realign with the changing dynamic world. They clarified their focus on to the premium segment vehicles from BMW, Mini and Rolls Royce. The following brands saw many new models being launched in the international market. Their Strategy Number ONE was concretised using the four pillars of growth, shaping the future, profitability, and access to technology and customers. Value generation and long term relations as motto’s were reshaped and presented during the first decade of the new millennium.

BMW also sponsors many sporting events and leagues. You would have spotted their logos during Olympics, various European Golfing events and PGA Championships, motor sporting events going by the name of Formula BMW along with Formula One (F1) racing tournaments. Furthermore, their vehicles have also played a pivotal role in many movies, among the most popular being the BMW i3 in the movie Mission Impossible starring Tom Cruise.

Experts have credited the success of BMW to the entrepreneurial culture that they have propagated over the years. Their ideas revolve around the ways and manners through which workers/employees are made to feel connected and responsible towards the company.

BMW cars have a distinct personality, owners of BMW’s have also claimed to feel associated and mark out the particular bond which lasts a life time. A BMW’s “true passion runs deeper”, so goes the company’s motto and truly indeed. The German workmanship has managed to produce the following portfolio:

BMW has been producing motorcycles since 1921 under the brand name Motorrad. Since 2004 they have the following segments:

There are no hierarchical barriers and the intent of the company has always been located in the very earth their seeds began to germinate. BMW is symptomatic of the German spirit of industriousness, dexterity, hard work and innovation.